There are only two northern white rhinos left worldwide, both of them female. Saving this representative of megafauna from extinction seems impossible under these circumstances, yet an international consortium of scientists and conservationists just completed a procedure that could enable assisted reproduction techniques to do just that.

On August 22, 2019, a team of veterinarians successfully harvested eggs from the two females who live in Ol Pejeta Conservancy in Kenya — a procedure that has never been attempted in northern white rhinos before. The eggs will now be artificially inseminated with frozen sperm from a northern white rhino bull, and in the near future the embryo will be transferred to a southern white rhino surrogate mother. The successful procedure was a joint effort by the Leibniz Institute for Zoo and Wildlife Research (Leibniz-IZW) Berlin, Avantea, Dvůr Králové Zoo, Ol Pejeta Conservancy and the Kenya Wildlife Service (KWS).

The procedure was the result of years of research, development, adjustments and practice. “Both the technique and the equipment had to be developed entirely from scratch”, says Prof. Thomas Hildebrandt from Leibniz-IZW. “We were able to harvest a total of 10 oocytes – five from Najin and five from Fatu – showing that both females can still provide eggs and thus help to save these magnificent creatures.”

The procedure was conducted with a probe, guided by ultrasound, which harvested immature egg cells (oocytes) from the ovaries of the animals when placed under general anaesthetic. “The anaesthesia went smoothly without any complications although these animals had not been immobilized for the last five years,” says Frank Goeritz from Leibniz-IZW. 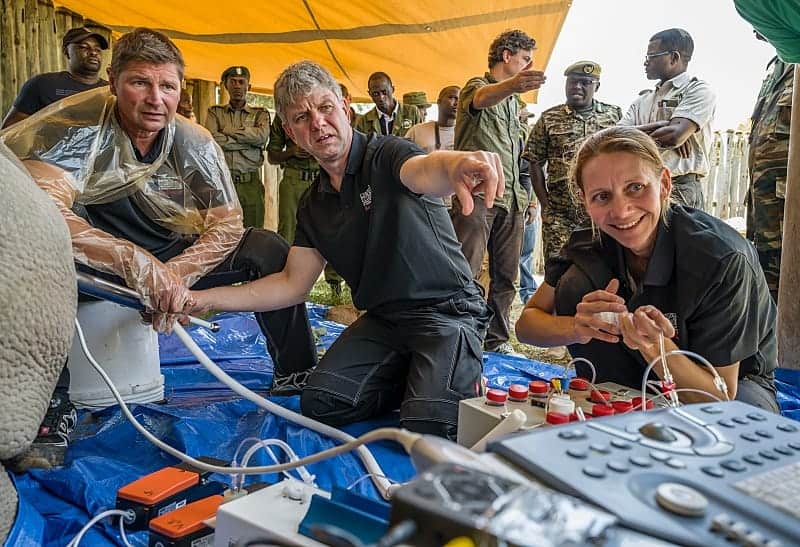 Fatu is undergoing the ovum pick-up procedure performed by Prof.Dr. Robert Hermes from Leibniz-IZW (left), Prof. Dr. Thomas Hildebrandt from Leibniz-IZW(middle) andDr. Susanne Holtze from Leibniz-IZW (right). Aspiration of eggs from the ovaries is a very delicate procedure due to the nearby presence of large blood vessels. Photo by Ami Vitale.

“The number of harvested oocytes is a wonderful success and proof that the unique cooperation between scientists, experts in zoos and conservationists in field can lead to hopeful prospects even for the animals that are imminently facing extinction”, adds Jan Stejskal from Dvůr Králové Zoo, where the two rhinos were born.

It was the partnership between Dvůr Králové Zoo, Ol Pejeta Conservancy and KWS that led to the translocation of Najin, Fatu and two male northern white rhinos from the Czech Republic to Kenya in December 2009, when it was hoped that breeding would be stimulated by the rhinos being closer to their natural environment. Although mating attempts were witnessed, there were no pregnancies. “We came to the conclusion after a health assessment in 2014 that, owing to various health issues, neither Najin or Fatu are able to carry a pregnancy”, explains Dr. Robert Hermes from the Leibniz-IZW. Two males – Suni and Sudan – died of natural causes in 2014 and 2018 respectively. Their sperm was cryo-preserved in the hope that assisted reproduction techniques would advance enough so that they could pass on their genome to a new generation.

“On the one hand Ol Pejeta is saddened that we are now down to the last two northern white rhinos on the planet, a testament to the profligate way the human race continues to interact with the natural world around us. However we are also immensely proud to be part of the ground breaking work which is now being deployed to rescue this species. We hope it signals the start of an era where humans finally start to understand that proper stewardship of the environment is not a luxury but a necessity,” said Richard Vigne, Managing Director of Ol Pejeta. 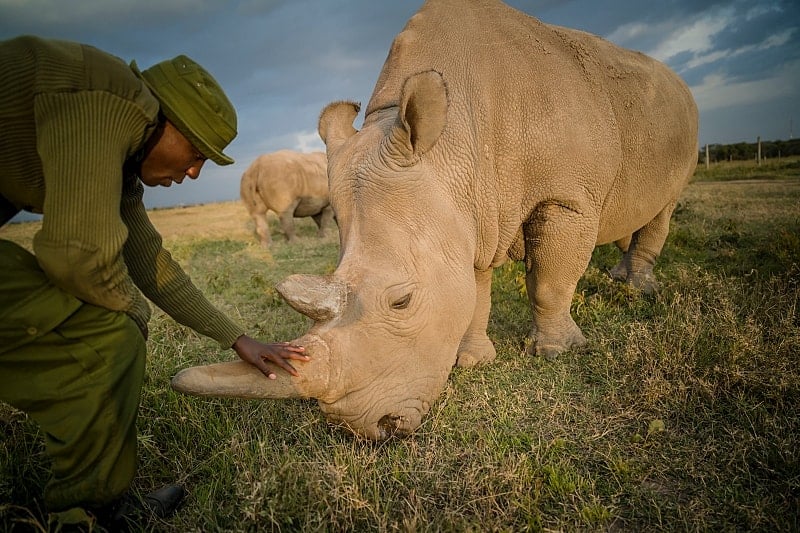 “The concerted efforts to save the last northern white rhinos should guide the resolutions the world makes at the ongoing CITES meeting in Geneva. The assisted reproductive technique should galvanize the world’s attention to the plight of all rhinos and make us avoid decisions that undermine law enforcement and fuel demand for the rhino horn,” says Hon. Najib Balala, Kenya’s Cabinet Secretary for Tourism and Wildlife.

“”We are delighted that this partnership gets us one step closer to prevent extinction of the northern white rhinos. This is particularly touching given the heartbreaking death of Sudan, the last male, who died of old age last year in Kenya,” says Brig. (Rtd) John Waweru, the Kenya Wildlife Service Director General.

“Yesterday’s operation means that producing a northern white rhino embryo in vitro – which has never been done before – is a tangible reality for the first time,” says Cesare Galli from Avantea, the Italian laboratory of advanced technologies for biotechnology research and animal reproduction. Avantea will now fertilise the eggs in vitro using the cryo-preserved semen of Suni and Saút.

The procedure is part of an international research project named “BioRescue”, a consortium to which Leibniz-IZW, Avantea, and Dvůr Králové Zoo are a part, and which is funded by the German Federal Ministry of Education and Research (BMBF). As well as harnessing the collective knowledge and expertise of the consortium to conduct the in vitro procedure, the project will also lead the development of techniques and procedures to create artificial gametes from stem cells. This will involve transforming stored tissue from northern white rhinos into induced pluripotent stem cells, and then into primordial germ cells. Germ cells can then be matured to develop into eggs or sperm cells – essentially widening the genetic basis and the quantity of the gametes. The stem cell approach is primarily carried out by BioRescue consortium members Max Delbrück Center for Molecular Medicine (Germany), Kyushu University (Japan) and Northwestern University (USA).

The whole procedure was conducted within an ethical framework that has been developed beforehand by ethicists and the other scientists and veterinarians involved in the procedure. “We developed a dedicated ethical risk analysis in order to prepare the team for all possible scenarios of such an ambitious procedure and to make sure that the welfare of the two individuals was totally respected”, says Barbara de Mori, the conservation and animal welfare ethics expert from Padua University. In addition, the procedure was conducted in compliance with Kenyan laws, policies and the relevant international requirements.

Featured image by photographer Ami Vitale
“Fatu is surrounded by her keepers and Dr. Stephen Ngulu of Ol Pejeta. She has received the pre-medication and is guided gently onto a soft sand bedding for the procedure before she receives the top-up medication to be fully anesthetized.”