We are in the midst of an elephant poaching epidemic across the African continent. Fueled by a growing middle class in Asia that is hungry for ivory status symbols, these iconic and intelligent mammals are being slaughtered for their tusks at an alarming rate. While there has been a lot of media focus on savannah elephants in eastern and southern Africa, very little light has been shed on the forest elephant crisis in central Africa. Here, in what some call Africa’s last Eden, a battle is playing out on multiple fronts for the future of the elusive forest elephant.

Silent Forests is an intimate, character-driven portrait of conservationists and activists who are struggling to stop forest elephant poaching in Africa’s Congo Basin region. The film explores this story through a range of dynamic subjects; including one of Cameroon’s first female eco-guards, a grassroots wildlife law enforcement group, a Congolese biologist studying elephant behavior, a reformed elephant poacher, and a team of anti-poaching sniffer dogs led by a Czech conservationist.

We begin deep in the forests of Congo-Brazzaville with biologist Clement Inkamba-Nkulu. Clement researches elephant clearings in the Bateke Plateau, doing acoustic monitoring to evaluate the abundance of elephants living in this dense forest. His studies are part of a larger regional effort called the Elephant Listening Project. The ELP studies forest elephant communication to help deepen our understanding about how these complex and intelligent animals “speak” with each other and form social bonds.

In neighboring Cameroon, we meet eco-guard Sidonie Asseme, a mother of five who has worked as a park ranger for the last decade –one of Cameroon’s very first female eco-guards. She treks for weeks on end in the dense jungle, searching for poaching camps – and her dedication has led to the arrest and detention of 15 poachers and counting. Not surprisingly, though, her work has made her a target: she has received death threats, beatings, and was once locked in a house by poachers who threatened to set her and three other rangers on fire.

An important part of Sidonie’s job is bio-monitoring, or observing the various animals that come and go from park clearings. Her favorite animals to see in the wild are the forest elephants; but in these same clearings that she used to see plentiful elephant herds at, she now sees none. “The poaching has scared them all off, they are really threatened here.” To drive home her point, she and her fellow eco-guards find recently abandoned poaching camps all around the clearings they are monitoring.

The film then goes from the depths of the forest to the chaotic streets of Yaounde, to meet Eric Tah and the LAGA Wildlife Law Enforcement Group. LAGA is a grassroots group of dedicated Cameroonian activists that have carried out countless operations into the web of wildlife crime in this region. They are just launching a new investigation into a trafficker who calls himself “Sans Peur”, or “Without Fear.” We observe the hours of work and planning that go into a sting operation. These investigations come with a high risk, especially when the criminals one is targeting are well-connected. Adding to the difficulties is the endemic corruption at some of the highest echelons of police and government ministries. The filmmakers embed with LAGA’s undercover unit and follow the anatomy of an investigation from start to finish – including the critical moment that a trafficker is taken down.

In the Republic of Congo, sniffer dogs are used for finding endangered species products that poachers are attempting to smuggle out of the country. This dog team is led by Arthur Sneigon, a Czech conservationist who has spearheaded anti-poaching activism in Congo since 2014. Recently, Arthur has struggled to get permission from the government to continue his sniffer dog operations. He laments that he is stuck in a web of bureaucracy and corruption, with administrators demanding bribes that he cannot pay. Arthur is part of the same activist network as Eric’s group LAGA, and the two sometimes work together across country borders to take down wildlife criminals. The film follows Arthur from Congo to Cameroon, where he is part of an investigation into a major ivory trafficking network – with a ringleader who smuggles ivory through a U.N. refugee camp.

The final focus of Silent Forests is Jean-Paul, a former elephant poacher who now owns a small cocoa farm and herd of goats. He is the head of a support group of reformed poachers in this area; they are atoning for their past actions and finding less destructive ways of making a living. We attend a meeting of this support group, where Jean-Paul and other members discuss the recent increase of poaching in the area, and plans for the future of their alliance.

Jean-Paul speaks about the poverty that drove him to poach in the first place, and he expresses regret at his decades of slaughter. “When I killed them, I felt terrible. The elephant – it’s like a person. When you kill them, the family sees it, and flees into the forest. If you hunted the Dad elephant, who did the Mom live with after that? What happened to his family?” The irony that his own concern for feeding his family caused him to decimate elephant families isn’t lost on Jean-Paul.

As passionate and tenacious as these conservationists are, they are up against huge institutional challenges like corruption and lack of funding that threaten to derail all their attempts to fight for the future of the forest elephant.

Silent Forests is Mariah Wilson’s third film about wildlife crime and illegal trade; it is a subject she is both passionate about and familiar with. Mariah’s hope is that this documentary will shed light on the severity of the situation in central Africa, and how damaging the ivory trade is for all species — humans included. 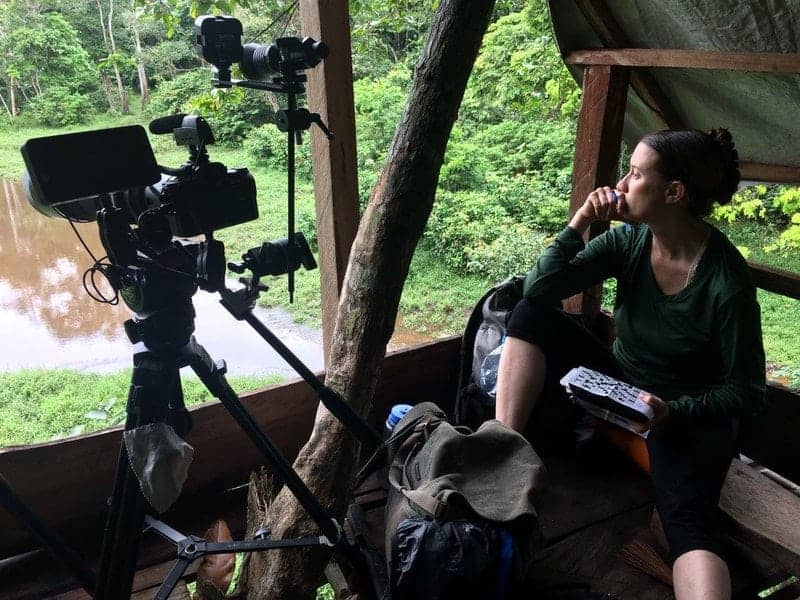 The film stands out from some other recent documentaries about poaching issues because three of the four main characters are from either Cameroon or Congo. This is about African activists, scientists, and eco-guards and who care deeply about what is happening in their own backyards. Mariah wants audiences to leave Silent Forests with a realistic look at what it is like to be on the frontlines of conservation in this region day to day – including the dangers, the rewards, the frustrations – and how good efforts are riddled with challenges from dishonest and inept government entities.

Urgent measures are need to save the remaining African forest elephants. Illegal poaching for ivory and encroachment into elephant habitat must be halted, and the international demand for ivory, which fuels poaching and the illegal trade, must be stopped.