Tanzanian President Jakaya Kikwete directly contradicted his own government’s study by claiming that a planned highway in the Serengeti National Park will not be the environmental disaster conservationists and scientists are claiming it to be.

Speaking to the World Bank, President Kikwete gave the green light to the controversial highway project, saying that the “road to the south would not solve transport challenges of communities living on the northern side of the park.” He once again claimed that “no tarmac road will be built through the Serengeti”– an oft-cited statement designed to distract from the real issue at hand. 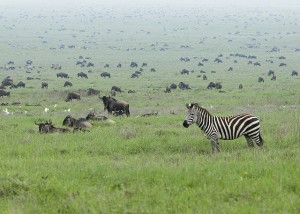 Each year, the Serengeti National Park in Tanzania hosts the spectacular migration of over a million wildebeest. Joined by thousands of gazelles and zebras, the wildebeest follow the rains through the Serengeti-Mara ecosystem, covering over 1,300 miles. The fossil record indicates that this migration may have been taking place for close to a million years. Olivia Judson eloquently describes it as “the last great migration on Earth.”

This impressive site is at risk of vanishing forever, as the Tanzanian government moves forward with the ill-conceived plan of building a major commercial highway across the Serengeti migration path, against the advice of concerned scientists and environmentalists around the world who point out the significant loss of wildlife and environmental degradation the project will cause. The Frankfurt Zoological Society explains:

We sincerely believe that the road will have disastrous effects on the entire ecosystem. The northern parts of the Serengeti and the adjacent Masai Mara are critical for the wildebeest and zebra migration during the dry season, as it is the only permanent year-round water source for these herds. Recent calculations show that if wildebeest were to be cut off from these critical dry season areas, the population would likely decline from 1.3 million animals to about 200,000 (meaning a collapse to far less than a quarter of its current population and most likely the end of the great migration).

President Kikwete is attempting to spin the situation by arguing that the road will not be paved. Whether the road eventually becomes paved or not is not as important as the simple fact that ever-increasing traffic will lead to significant environmental problems. According to the government’s own study, there will be over 800 vehicles a day by 2015 and 3,000 a day by 2035. By the end of 2016, over a million vehicles will have used this highway.

The Serengeti is an extremely popular destination for green travelers, and for good reason. Several tour operators have come out against the highway, as the project will severely damage their industry in the long term. The coalition Save the Serengeti has formed against the project, but plans continue to move ahead.