Vulture populations in one of Africa’s most important wildlife reserves have declined by 60%, say scientists.

The researchers suggest that the decline of vultures in Kenya’s Masai Mara is being driven by poisoning.

This appears to be aimed at carnivores that kill the livestock, but one carcass can poison up to 150 vultures.

Munir Virani, who is director of the Peregrine Fund’s Africa programmes, has called for use of furadan to be banned in the region “to preserve these keystone members of the scavenging community”.

“People may think of vultures as ugly and disgusting, but the birds are essential for the ecosystem,” he says.

Their taste for carrion actually makes them the landscape’s clean-up team – ensuring the region is not littered with bodies, helping contain the spread of disease and recycling nutrients.

The results of this latest survey of vultures are published in the journal Biological Conservation.

The terrible consequences of a vulture population crash have already been demonstrated during a case that became known as the Asian vulture crisis.

Populations of Gyps vultures in particular, in South Asia, crashed by more than 95% over just a few years in the 1990s, primarily because farmers treated their cattle with the pain-killing drug diclofenac.

The pain-killer, it turned out, was lethal to the vultures, which fed on the dead cattle.

As well as driving three species of vulture to the brink of extinction, the crisis provided a huge amount of food for wild dogs, which moved in to take the place of the birds.

This had the devastating side-effect of increasing the spread of rabies.

And Dr Virani is concerned that a similar situation could happen in Kenya.

The solution in Africa though, could be much more straightforward than in South Asia.

By boosting the public image of vultures in the country, the Peregrine Fund hopes to stop people from carrying out these “revenge poisoning attacks”.

Between 2003 and 2005, Dr Virani and his colleagues drove across the expansive Kenyan landscapes, counting vultures.

He and his colleagues then compared the results of these surveys with the results of surveys carried out in the 1980s. The comparison revealed a 60% decline in vultures.

Corinne Kendall’s work has taken this survey a step further.

Ms Kendal is a researcher from Princeton University in the US, who has also been working with the Peregrine Fund – tracking and monitoring the birds to investigate the extent of the poisoning.

“We attached the GPS trackers like little backpacks,” she tells BBC News.

“There’s a piece that sits on their chest and two loops around each wing.”

“But we had four out of 16 vultures killed in the first year and three of those were confirmed cases of poisoning.

“From a sample of 16, it’s difficult to know how representative that is, but it’s extremely worrying.” 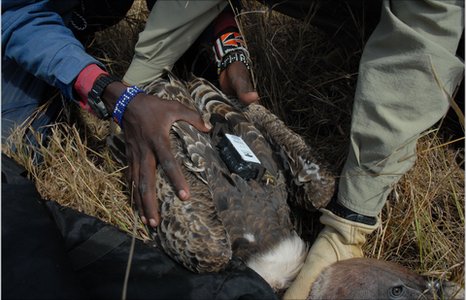 The transmitters also revealed that most of the poisoning happened outside of the reserve, which is a protected area.

“If they stayed in the Mara Serengeti they would hardly ever get poisoned,” says Ms Kendall.

“But, based on the transmitters, it appears that the vultures that use the Masai Mara have very large home ranges – from 30,000 to 80,000 square kilometres, depending on the species.”

And the birds can travel over 250km in a single day.

This means that poisoning in and around the Masai Mara could have an effect on the vulture populations, not just in other parts of Kenya, but in other countries in Africa.

Ms Kendall explains to BBC News that in the Mara ecosystem, the birds consume 70% of all available meat.

“If we lose vultures, there’s no other animal that will be able to consume the volume,” she says.

The reserve is a vast dining table for the birds, especially during the annual wildebeest migration, when 1.5 million of the animals march across the plains in search of grass.

“So without vultures, during the wildebeest migration you would have carcasses lying everywhere and you would see lots of disease spread,” said Ms Kendall.

In the last three months alone, Dr Virani says he has discovered six cases where vultures have been poisoned.

The Peregrine Fund has now recommend that three vulture species – the African white-backed, Ruppell’s, and hooded vultures – be relisted as Vulnerable on the IUCN Red List, an internationally recognised compilation of threatened species.

“If we lost the vultures,” says Dr Murani, “tourists would have to travel around the reserve with face masks on, because the stench from rotting wildebeest carcasses would be unbearable.”