Are these mysterious orange cave-dwelling crocodiles developing into a new species?

Many people find caves scary, and they get even more scary when you encounter orange creatures with blazing red eyes. “It was maybe two or three meters from me and the eyes were bright red, reflecting my light. I was so frightened,” Olivier Testa, a cave expert recently said in an interview with CNN.

Tesla was part of an expedition into Gabon’s Abanda caves following up a tip about dwarf crocodiles living there. While crocodiles sometimes retreat to underground nests and dugouts during droughts, this is the first population of crocs known to live in caves.

African dwarf crocodiles are generally found above the ground throughout Gabon, but the cave-dwelling population is filling a unique niche in the ecosystem. The crocodiles can survive in the caves due to the plethora of cricket and bats that reside there, according to crocodile expert Matthew Shirley of the Rare Species Conservatory Foundation. 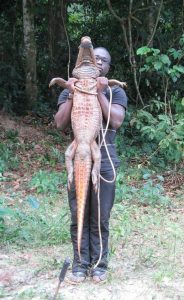 Testa and Shirley are part of the Abanda Expedition and recent research suggests that the animals may be evolving into a totally new species.

To test this, the researchers tested blood samples from the crocodiles found in the caves, and compared them with forest-dwelling crocs living outside in the area. It turned out the cave dwelling crocs have different genetic haplotype, which means that the reptile is adapting or mutating to life in the dark.

The current population size is not more than 100-200 individuals, according to Shirley.

Why are the crocodiles turning orange?

Testa and Shirley think it might be because of acidic bleaching:  “The crocodiles live in liquids — that’s guano (bat faeces) — and it’s quite a harsh environment. There’s a chemical attack on the skin and it bleaches the skin. But we don’t have means to prove that,” Testa told CNN.

The research team wants to find out and understand why these crocodiles started to live in these inhospitable caves. Is it to survive a past climate change? Is it to escape a predator? Did they get trapped here?

For more information about the expedition, please visit: