Dedicating 56 years of his life to animal welfare and conservation, South African vet Hymie Ebedes  became world-renowned for his expertise and pioneering work across not only the African continent, but also in countries such as China, Israel, Australia and Spain.

Therefore, the 24th November 2015 will not just be the day a family unite to mourn the loss of a husband, father, grandfather and great-grandfather, but the day the world mourns the loss of one of its finest forerunners of veterinary care.

Type the name ‘Hym Ebedes’ and an animal species into a google search and there are hundreds of sites relating to his ground-breaking work as a veterinarian. He was a man dedicated to the welfare and conservation of animals. Dr. Roy Bengis, chief state veterinarian at Kruger National Park: “He will be remembered for being the man who introduced tranquilisers into wildlife management and care; a man who initiated the logistical solutions by translocating animals by air; the man who identified Anthrax in Etosha National Park and established the appropriate protocols to identify and control this deadly wildlife disease.”

Dr Hymie Ebedes, was born in Ermelo, South Africa on 14 June 1936. A graduate from The University of Pretoria veterinary faculty at Ondersteport in 1959, he ran a private practice in Springs, South Africa from 1959 to 1964.

In 1965 he embarked on his remarkable career in wildlife as the first biologist/veterinarian in the Etosha National Park, Namibia. It was here that he discovered Anthrax in the park and established the appropriate protocols to identify and control this deadly wildlife disease. Another highlight during this period was writing the manual for translocation of Black Rhino and he became the first person in Namibia to translocate wild animals by air: a herd of rate Black Faced Impala from the Kaokoveld to the Etosha National Park.

‘Hym’, as he liked to be called after his tenure at Etosha, moved back to South Africa and settled in Stellenbosch. It was here that he was the State Veterinarian from 1975 to 1980. His passion for wildlife later attracted him to the National Zoological Gardens in Pretoria and he relocated once more to further his research. His focus was the humane care for animals and he was Chief of Veterinary Services from 1981 to 1989.

Hym’s son, Simeon, who loved going to work with his dad, remembers a Saturday afternoon when his father was called to the zoo for an emergency: a sick Polar Bear. Unfortunately the bear was not doing well and Hym commenced Cardiopulmonary resuscitation (CPR). Relentlessly, he prevailed for about twenty minutes. Simeon joked: “For those of you that don’t know how it’s done, and if ever the opportunity arises to resuscitate a Polar Bear, you hold its mouth closed with both hands and blow a full breath of air into its nose a few times, it takes about 5 breaths to fill its lungs then do strong chest compressions with both hands.” Sadly, the bear could not be saved. Simeon said: I’ll never forget the look of despair on my father’s face and the quiet drive home.’

During this time, Hym was a key contributor to the still in print book ‘Capture and Care of Wild Animals’. His cutting-edge research on the use of long-acting tranquilizers for wild caught animals has saved tens of thousands of animals’ lives; this research limited the high mortality of wild-caught animals by minimising their stress during the process. 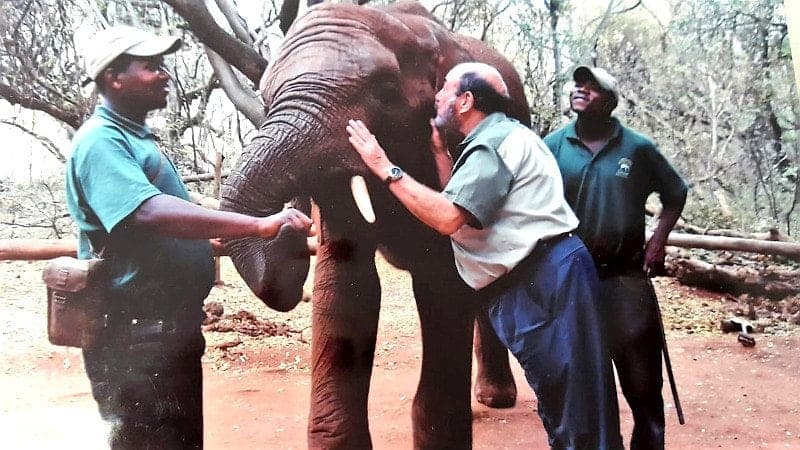 After 9 years at the Zoological Gardens, he was appointed Wildlife Specialist with the department of Agriculture in Pretoria where he remained until 1995. Whilst there, he went to a wildlife auction and discovered dead animals in ‘bomas’. He immediately threatened to have the auction shut down. Animals were being transported to unsuitable environments and many died in transportation. Inspired by this event, he wrote the code for SABS for the Capture, Care and Translocation of Wild African animals; this included the guidelines for humanely caring for animals at wildlife auctions, who were previously subjected to cramped space and long periods with no water in small spaces amidst blisteringly hot temperatures.

Dr Ebedes was also responsible for the deregulation of the strict captivity guidelines for African elephants on private game reserves by allowing the use of electric fences to retain them, thus reducing the cost of containment and giving private game farmers the ability to have elephant on their reserves.

Between 1995 and 2000, he worked as a Specialist Scientist for the Agricultural Research Council before becoming the Chairman of the Committee for the Training and Welfare of Elephants.

Not afraid of controversial topics, Dr. Ebedes spoke out against canned hunting. As a research veterinarian, he also played an important role in the (re)discovery of a group of lions with distinctive long, wide black manes at a zoo in Addis Ababa during a research expedition into Ethiopia’s wilderness areas. These animals are possibly decedents of the Barbary lions from the Atlas Mountain region in present-day Morocco.

By using media platforms and research studies, Hym was able to raise the awareness of animal conservation and offer invaluable assistance, guidance and advice in several areas of animal welfare to zoos, organisations and charities. He was heavily involved in preventing nefarious procedures in game reserves, transportations and auctions for years, saving animal lives at every turn.

Sharing his knowledge was always important to him. In his final working years, Dr. Ebedes lectured in wildlife diseases at the Pretoria Technikon from 2003 to 2006. His classes were always in high demand.

Hym’s passion to care for animals was like an elixir for him and gave him great pride. He was fortunate to share his passion across the world, regularly travelling the globe – taking rhino to China; cheetah to Australia and giraffe to Hong Kong. Ebedes was the veterenary consultant to the Spanish government on how to catch rare Bucardo Ibex in the Pyrenees mountains and management of white rhino and cheetah at Fossil Rim, Glen Rose, Texas. As well as this, he worked across many African countries advising on and investigating the welfare of animals.

His ground-breaking research is still being used in Zoos and wildlife reserves across the globe.

“Hymie made an outstanding contribution to the care and capture methods of wildlife, particularly the use of the long acting tranquilizers”, says Roni King, Authority Veterinarian at  the Israel Nature and Parks Authority.

His work deserves reverence: here was a man whose passion for conservation was unmatched. Never wanting recognition or financial compensation, his reward was to make a difference for animals across the globe. The list of achievements is immense and they can’t possibly all be mentioned here.

He is survived by his wife Audrey and their children Simeon, Michael and Gertrude, his stepdaughters, Alicia and Tania, and 11 grandchildren and 7 great-grandchildren.

Dr. Ebedes will be missed by humans and animals alike. It is not surprising considering his invaluable contributions to the natural world; he saved lives, opened the doors to innovative work, taught and inspired many people around the world to continue his legacy.