Five years ago, a dentist from Minnesota killed Cecil the lion Hwange National Park’s most famous resident. This caused an outcry in the United Kingdom and in the rest of the world against trophy hunting. Yet people are still killing big game for sport.

A new book reveals explosive insight into hidden world of trophy hunting. The book was written by Eduardo Goncalves, a former WWF consultant, CEO of a major UK animal charity, journalist award-winning founder of the Campaign to Ban Trophy Hunting which is supported by over 100 celebrities.

Eduardo Goncalves is currently leading an international campaign to close a loophole in CITES wildlife trade laws which controversially allow trophy hunters to shoot critically endangered animals. The campaign is supported by dozens of conservation groups as well as Members of the European Parliament across the EU and political parties. He is also working with wildlife and animal welfare groups across Europe to ban hunting trophy imports throughout the EU, and is assembling a group of lawyers and senior politicians to push for an international treaty banning all trophy hunting around the world.

Among the astonishing revelations in the book are how: 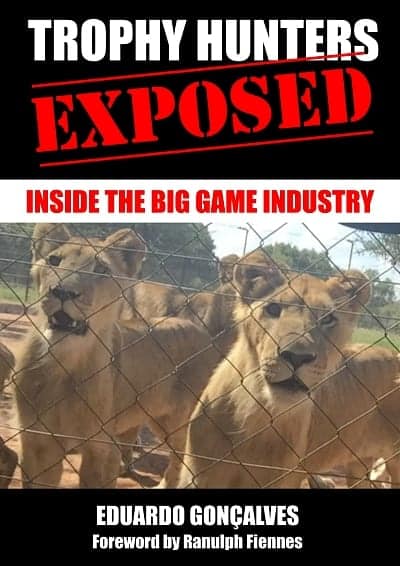 The foreword has been written by legendary explorer Sir Ranulph Fiennes, who grew up in Africa:

“Far from protecting endangered species, the law today is failing wildlife.  As many as 1.7 million animals have been killed by trophy hunters over the past decade.  Hundreds of thousands of these are from species protected by law because scientists say they are at risk of extinction.  We are frequently told that we face a biodiversity crisis every bit as serious as the climate crisis.  Yet the slaughter, inexplicably, continues unabated”.

The preface has been written by Bishop John Arnold, the Catholic Church’s official spokesperson on Environmental affairs in England:

“We continue to slaughter animals, often in the cruellest fashion, for sport and fun. How can we claim any dignity in that? What pride can there be in arming ourselves with guns to kill defenceless creatures which are no threat to us? There are arguments that can be understood about the killing of an animal for its meat – but for a trophy to hang on the wall? There can be no justification in that.”

The author, Eduardo Goncalves explains: “Trophy hunting is often seen as an aberration by a handful of individuals. However this investigation shows it is a large, powerful industry with a well-oiled and generously-funded lobbying machine.”

In echoes of ‘1984’, the hunting industry claims killing animals for selfies and souvenirs has ‘conservation’ value. Tobacco companies once promoted ‘healthy’ cigarettes and the oil industry claimed global warming would ‘green’ the planet.

Some of these ‘conservationists’ have secured influential positions within wildlife decision-making bodies, however they are today revealed to be among the world’s leading trophy hunters. Their organisations are industry fronts more interested in protecting ‘hunters’ rights’ than endangered animals. They have literally put the ‘con’ into ‘conservation’.

“South Africa’s captive-hunting industry is out of control, with dozens of species being bred for quick and dirty trophies and new hybrid animals being bred for novelty value. South Africa risks, for a second time in recent history, becoming an international pariah with potentially devastating consequences for the country’s economy and tourist industry.”

“If this book doesn’t get trophy hunting banned, I don’t know what will. This is an incredible investigation that reveals everything the industry would rather you didn’t know.”

“If there’s one book to buy about animals this year, this is it.  Trophy hunting is legalised animal abuse on an industrial scale.  We cannot call ourselves civilised while we allow trophy hunting.  ‘Trophy Hunters Exposed’ tells us why we must abolish it.”
Joanna Lumley

‘Trophy Hunters Exposed – Inside the Big Game Industry’ is published by Green Future Books Ltd and is available in paperback and kindle from www.greenfuturebooks.com

Proceeds will be donated to the Campaign to Ban Trophy Hunting

For background about the author, see https://edgoncalves.wordpress.com/about/