For years, the dama gazelle has been of great concern to the international conservation community. This beautiful, uniquely adapted but also heavily poached species of the Sahel has suffered a long decline and now stands at the brink of extinction. Despite the risks and extreme rarity of the species, the Sahara Conservation Fund (SCF) mobilized a team of national and international experts in late January 2020, to rescue a few of the remotest and least protected dama gazelles in the wild. Though only comprising four individuals, the rescued gazelles are genetically some of the most diverse known to science.  With captive-breeding as an essential element, it is hoped to turn the tide of extinction for this most graceful of species.

With less than 100 individuals remaining in the wild, divided into four small isolated populations in Chad and Niger, the dama gazelle (Nanger dama) is one of the world’s most threatened species. Given the tiny remaining population, the loss of a single animal has massive repercussions for the species, particularly in terms of the gene pool. Dama gazelles raised in captivity in zoos or private collections, of which there are relatively few, just do not have the same level of diversity as their wild counterparts.

In a last-ditch effort, the NGO Sahara Conservation Fund orchestrated an unprecedented project to capture several damas in the Manga region in western Chad, where they are unprotected, and move them to a safe location, where they can breed and multiply. The proposal was met with immediate and unconditional approval from the government of Chad, the IUCN/SSC Antelope Specialist Group, the Fondation Segré, Rewild, and the Royal Zoological Society of Scotland. To carry out the mission, a multi-national team was assembled from Chad’s Directorate for Wildlife Conservation and Protected Areas, the Environment Agency Abu Dhabi, the Zoological Society of London, Fossil Rim Wildlife Center, the Smithsonian Conservation Biology Institute, Gulf Breeze Zoo, and Noé Conservation.

After preliminary field work to locate the animals in May and early November of 2019, a helicopter capture team was mobilised in January 2020 to rescue the animals. After a twelve-day mission and 30 hours in flight over the vast desert, the team successfully located and darted three female damas. The gazelles were then safely transported by air over 350 kilometres to the nearest protected area: the Ouadi-Rimé-Ouadi Achim Game Reserve (OROAGR) in central Chad. To cap it all, a magnificent male was successfully caught in the OROAGR to form an initial breeding group. 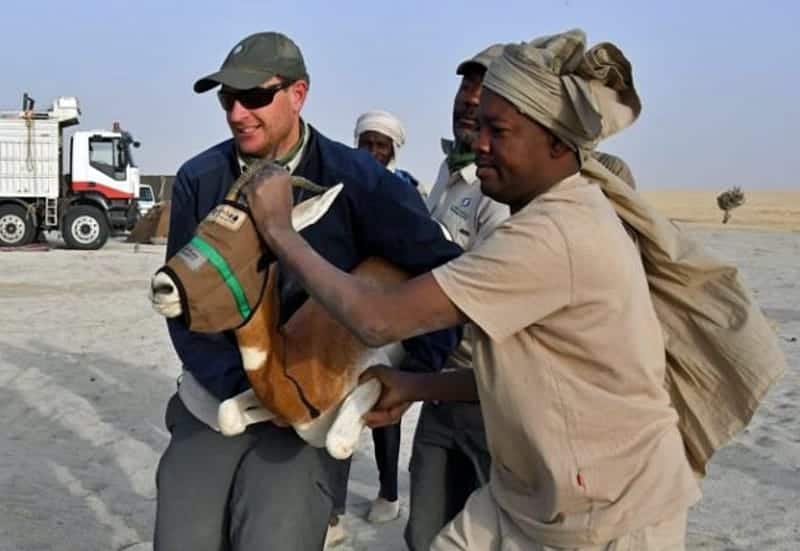 Once the capture is done, comes the careful handling and veterinary required to move the animals safely. Photos © John Newby/Sahara Conservation Fund.

The Sahara Conservation Fund is currently implementing two major conservation programmes in the reserve in partnership with the Chad’s Ministry of Environment. These are the Ouadi Rimé-Ouadi Achim Project (POROA), co-financed by the European Union, and the Scimitar-horned Oryx Reintroduction Programme (Project Oryx) steered and funded by the Environment Agency Abu Dhabi. These two programmes provided the necessary infrastructure and care to keep our four new guests in good health as soon as they arrived in the reserve on 27 January (enclosures, food, etc.).

With dama gazelle reintroduction attempts in other parts of their Sahel-Sahara range having largely failed in recent years, all eyes may now turn to the OROAGR, which is providing a framework that is particularly favourable to species recovery. The reserve is already home to a population of wild dama gazelles estimated at some forty individuals, which SCF will help further protect. Thanks to Project Oryx, animal translocation operations are already underway, which in the past have enabled the return of large Saharan antelopes to the wild, such as the scimitar-horned oryx, and more recently the addax. Captive bred dama gazelles from major international zoos could later join those in the reserve to help boost the population.

This is the conclusion drawn by John Newby, Senior Adviser at the Sahara Conservation Fund in charge of coordinating the mission: “With more and more species facing imminent extinction, conservationists and their donors really must up their game. Already, several unique populations of large mammals have disappeared for lack of timely action. More and more ambitious approaches must be taken, and as the recent rescue of dama gazelles has shown, it is possible to work under extreme conditions and very poor odds and still win.”

“This is not about thinking outside of the box”, adds John Newby,” it is about doing what is patently obvious and doing it now.”