More than 100 civil society organizations have written to the President of the African Development Bank, Mr. Akinwumi Adesina, warning the bank against financing the East African Crude Oil Pipeline, which they call “an exceptionally high-risk project.”  The proposed 1,445-kilometer pipeline from Hoima, Uganda to the port of Tanga in Tanzania would be the longest heated pipeline in the world.

Organizations from Africa as well as Europe, the United States and Asia expressed grave concern over a request from the governments of Uganda and Tanzania to the African Development Bank for funding of the pipeline project, which they say poses global climate risks, local environmental harms and threatens the livelihoods of millions of people in East Africa.

The pipeline would enable industrial-scale oil extraction at Uganda’s Albertine Graben, which will jeopardize the Murchison Falls National Park, Uganda’s second-most visited national park and home to rare and endangered species, including eastern chimpanzees, elephants and lions. The pipeline would also threaten ecologically important mangroves on Tanzania’s coast that support an array of marine life and the livelihoods of approximately 150,000 people there. 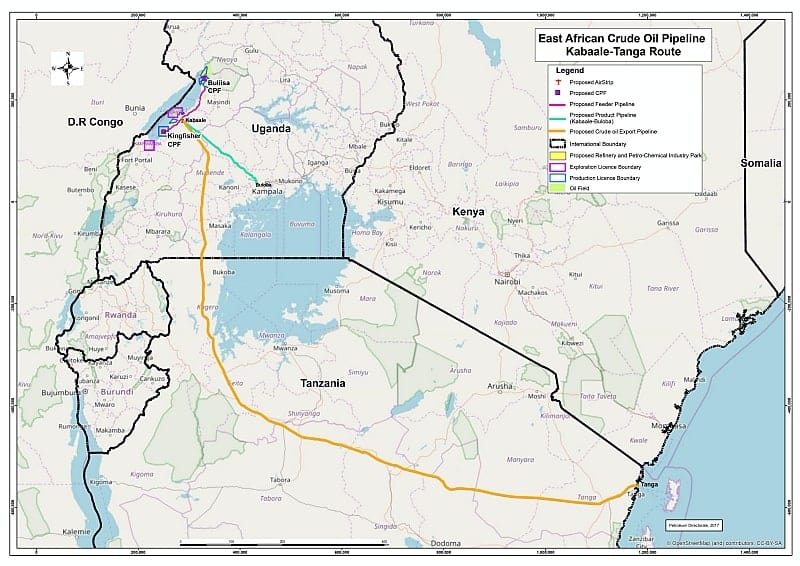 “We urge the African Development Bank to reject Uganda and Tanzania’s request to help finance the East Africa Crude Oil pipeline. The bank should be seeking opportunities to fund renewables that can contribute to the region’s energy needs in a clean and rights-compatible manner instead,” said Diana Nabiruma, Senior Communications Officer of the Africa Institute for Energy Governance (AFIEGO), based in Uganda.

If constructed, the pipeline would be the longest heated pipeline in the world, traversing heavily populated districts in both Uganda and Tanzania and carrying an estimated 216,000 barrels of crude oil per day (10.9 million metric tons per year).  The emissions produced when this fuel is burned would be at least 34.3 million metric tons CO2-equivalent (CO2e) per year, dwarfing the current annual emissions of the pipeline’s two host countries combined, and adding roughly as much carbon to the atmosphere as Denmark produces annually.

The letter’s authors point out that if the African Development Bank approved the funding request for the pipeline, it would be acting against its commitment to meet the Paris Agreement goals as well as its commitment to support the transition to renewable energy.

“At a time when the world needs to come together urgently to decarbonize our energy and transport sectors, the last thing that Africa’s premier development bank should be considering is the financing of a massive  oil pipeline,” said  Eugenie Cha, Africa Program Director for Inclusive Development International. “This project is not only wholly incompatible with the African Development Bank’s climate commitments, but it also poses unacceptable risks to local communities and ecosystems that will make it all but impossible to meet the bank’s own environmental and social safeguards.”

Between 9,500 and 14,500 farms would be affected by the pipeline’s construction. Nearly a third of its length (460 kilometers) would be constructed in the basin of Africa’s largest lake, Lake Victoria. More than 30 million people depend on Lake Victoria for water and food production. Moreover, the pipeline will cross important wetlands that meet the water needs of millions of people.

“Potential oil spills from EACOP due to various factors will have disastrous consequences for people and nature. One of the major risks is freshwater pollution and the degradation of wetlands, which provide vital ecosystem services and livelihoods to communities in the region.  This is why it is so important not to fund such infrastructure developments within areas of particular importance for biodiversity and ecosystem services; areas that are not only important for communities but also essential to achieving the Aichi Biodiversity Targets of national governments within the framework of the Convention of Biological Diversity,” Henk Simons Senior Expert Nature Conservation at IUCN National Committee of The Netherlands.

The pipeline is under development by three oil companies: Tullow, Total and CNOOC in partnership with the Ugandan and Tanzanian state-owned oil companies. South Africa’s Standard Bank (via its subsidiary Stanbic Bank Uganda), Sumitomo Mitsui Banking Corporation of Japan and China’s ICBC are reported to be the project’s financial advisors. Debt financing for the pipeline is expected to amount to approximately USD 2.5 billion.

Project developer Total was recently taken to court by environmentalist groups for failures to comply with human and environmental rights requirements under the French Duty of Vigilance Law.

“With impacts on the climate, nature and local people this severe and local opposition to the project mounting, no prudent bank should be willing to back this project,” said Ryan Brightwell, Researcher and Editor with BankTrack. “Banking sector standards like the Equator Principles are simply not up to the job of ensuring risks on this scale are well managed.””

Construction of the pipeline also threatens to open up oil extraction in neighboring Democratic Republic of the Congo, where exploration has been temporarily halted. “We in the DRC are also concerned that this project could potentially endanger vitally important and biodiverse ecosystems, such as Virunga National Park,” said Bantu Lukambo of DRC-based IDPE

“The campaign to stop this pipeline has growing appeal in Africa because it’s very clear that the 300 permanent jobs the pipeline is expected to create won’t come close to compensating for the damage to the environment or the loss of jobs in agriculture, tourism and mangroves that will result from the pipeline’s construction and operation.    The African Development Bank should reject this request,” said Brian Katabazi of Centre for Energy Governance in Uganda.

Planting Trees Will Not Solve the Climate Crisis